I Can’t Believe You Haven’t Seen: The Dead Zone 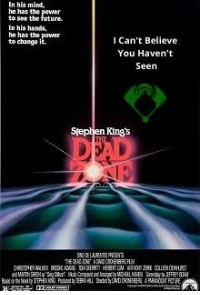 This review of David Cronenberg’s adaptation of Stephen King’s The Dead Zone continues our “I Can’t Believe You Haven’t Seen” series, where we’ll be analyzing and reviewing classic movies that, for one reason or another, we never watched until now. As huge fans of science-fiction it is rare to find a film, especially one so famous, that both of us haven’t watched. I’m unsure why I never checked this one out before now. Perhaps Stephen King’s catalog is just so long that I’ve only now made it to The Dead Zone; alternately, maybe I just never had a chance to watch it until it came to Netflix. Either way, I’ve now seen it, and here are my thoughts:

Watching an old movie for the first time can be a good thing. You don’t get swept up by the reviews and popular opinion surrounding its release. You get to see how it has held up over time. You don’t have any childhood bias or troubles comparing how your thoughts on it have changed. In many ways it’s like opening a time capsule. And though I love science-fiction and am familiar with much of Stephen King’s work, I had never watched The Dead Zone until recently.

My initial thought on the movie was: “Wow, Christopher Walken looks young!” And my second thought was: “He was an equally amazing actor back then as now!” Other than The Deer Hunter, I haven’t seen a lot of Walken’s old television material or movies, so I didn’t realize just how great he not only is now, but always has been. He does a phenomenal job throughout this entire film, playing the confused man who wakes up from a coma with a new life and powers. Watching this film made me think he would have made a spectacular Hulk, but that’s a discussion for another time!

I also don’t have a lot of experience with Cronenberg’s older films, though A History of Violence and Eastern Promises are both criminally underrated, both belonging among the top-100 or so movies since 2000. I wouldn’t say The Dead Zone matches these two more modern films, but it definitely holds its own against the source material and as a standalone science-fiction flick.

As science-fiction movies go, this film was almost a drama. It had no gadgets, no aliens, none of the things normally associated with the genre. Still, the tone and questions posed form a science-fiction framework. Due to this lack of showmanship that films like Blade Runner, Terminator, and the Alien movies have, it feels like something different, maybe a predecessor to 12 Monkeys in many ways. It’s very bare and stripped down, but that’s also what makes it accessible and interesting.

I really loved both the pace and palette of the film. It flowed from scene to scene steadily and naturally, with good sets and great acting. It was by no means a masterpiece, but taken for what it is, an 80s-era science-fiction film based on a Stephen King story, it is very good.

Recommended if you haven’t seen it.