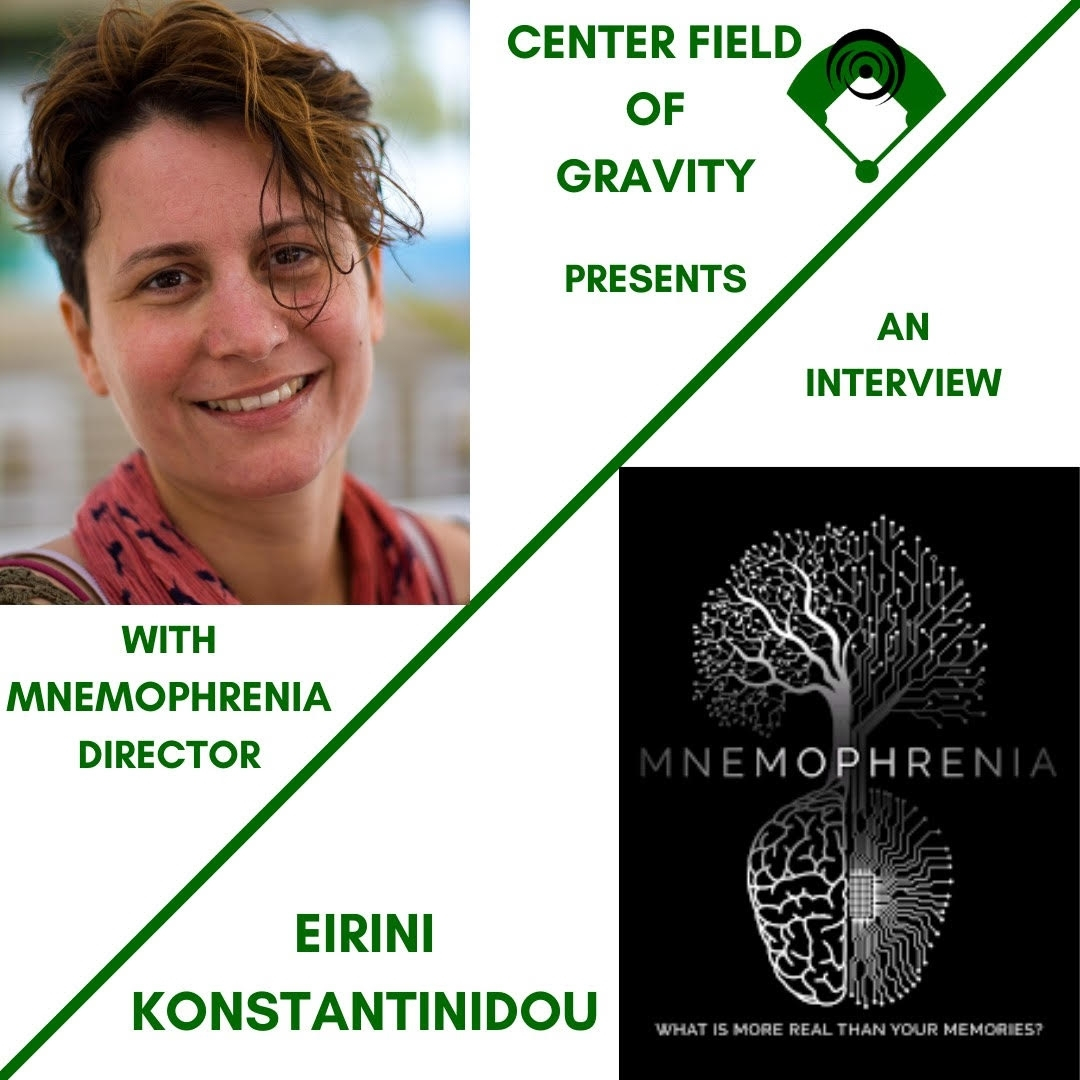 We were recently granted the privilege to interview Eirini Konstantinidou, director of the recent film Mnemophrenia. She is also Senior Lecturer in Film Studies at the University of Essex. Here’s what she had to say:

Hello and thank you for this interview. We know you’re busy and are honored that you’ve chosen to spend some time with us. Before we ask our questions, is there anything about yourself or your movies that you’d like to share with our readers and viewers? Maybe some personal zeitgeist that fuels your ideas and will give us a broader picture of who you are and what your films mean?

I’m generally very interested in making films that examine the human condition, what makes us human and ask difficult questions about our identity, behaviour and intentions. I don’t necessarily want to offer a clear answer to these questions but I want to challenge the audience’s perceptions and preconceived ideas and invite them to see and experience the subject matter of my films possibly from a different perspective than their own. My first feature, Mnemophrenia, questioned how we may be affected by technology’s rapid advancements and how we might respond to that as individuals and as a society.

Moreover, I have always been intrigued by ensemble pieces and almost all my films (including short films) followed the stories of various characters and not just one main character. However, this won’t necessarily be my main approach to storytelling and I’m currently working on a new film that focuses only on one character.

Culture always impacts art in significant ways. You have received college degrees in three different countries. What heritage do you identify with and how has this affected your worldview and filmmaking?

I was born and lived in Greece until I was 22 years old and since then I have lived and studied in the U.S. and UK and also briefly lived in Netherlands during a gap year. Since then I have been living in London for the last 15 years. Having lived in different countries has clearly enriched my life experiences and has contributed to many of my personal views and approach to life and art. Although I am Greek and I value a lot of my Greek heritage, culture and traditions I don’t identify with it when it comes to filmmaking. I personally don’t think that art should be confined to any borders and the films that I’m interested in making deal with more universal themes and ideas that are not localized.

You strike us as a filmmaker who loves to read. Who are some of your favorite authors, fiction or nonfiction, and what are some books that have shaped you either as an artist or a person?

The last few years I have been mostly reading non-fiction and especially books that explore the human condition from a philosophical point of view or the concept of consciousness and the ways that we try to comprehend it from a psychological and scientific perspective or through the prism of mindfulness. I don’t generally like to make lists of favourite films, directors, authors or books, but maybe I should start doing that because it’s quite a common question and I always find it hard to answer.

However, I did read George Orwell’s 1984 again very recently and it has struck me how topical it feels especially with the current proliferation of social media and the issue of ‘fake news’ and the widespread difficulty of coming to a general agreement of what truth really means and is. I would urge anyone to read it if they haven’t already done so or read it again if they haven’t for quite some time.

Alternatively, what are some of your favorite and most important films or filmmakers.

Again, I don’t have one or two favourite films but I could say that I have admired, been influenced and inspired by the following filmmakers and their distinctive directorial vision: Stanley Kubrick, Akira Kurosawa, Andrei Tarkovsky, the Coen Brothers, David Cronenberg and Pedro Almodóvar. It’s quite obvious and sobering that unfortunately the list doesn’t include any women filmmakers and I really do hope that this will change for future generations.

We’ve read that Mnemophrenia was shot and filmed in a staggered way that was intended to place the actresses and actors more firmly in their roles. Can you explain a bit about this process?

I had a firm idea of the overall story for Mnemophrenia, but I held many improvisation workshops during rehearsal to build the characters and the script. I then boiled down all that material with my partner Robin King (who plays Nicholas) into shooting scripts. The actors all said it was a rare treat to be so involved in the creation of their characters, and I believe the natural performances that resulted contribute to the blurring between reality and fiction for which the film aims.

Moreover, the film was almost wholly self-funded, which meant it had to be made slowly due to lack of resources. It took overall eight years to complete and release it. However, apart from the limited budget I also wanted to shoot each part separately so that I could show the previous story to the subsequent part’s cast during their improvisation workshops, mirroring the theme of later generations standing on the shoulders of their ancestors’ experiences.

Also, can you further elaborate about the advantages and disadvantages of this unique process? Would you do anything different next time? What worked particularly well that you will carry into your future endeavors?

As explained above, the limited budget was big part for the film to be made in sections. I believe that this decision was the reason why the film managed to get completed and I probably wouldn’t have been able to finish it if I attempted to do it in the conventional way. Furthermore, I thoroughly enjoyed working with my actors through improvisation in order to build their characters and eventually the dialogues and I found the process very rewarding. I would love to be able to work with improvisation again in the future but that will always depend on budget and time constraints.

On a practical level, each part was shot by a different Director of Photography ensuring that each one has a distinct visual style. I believe that making each story look different orients the viewer as the story jumps back and forth in time. More than that though, I wanted to tell each character’s story with a different visual language. The whole film is essentially ‘found footage’: excerpts from Jeanette’s documentary; Nicholas’s AI recording chamber; and Robyin’s POV recorded directly by her brain chip.

As for the disadvantages of the process, the obvious one is how long it took for the film to get made and not having a constant strong momentum that drives the whole production. This way you are increasing the chances of more obstacles getting in the way as well as possibly losing the original passion for the project which thankfully didn’t happen in my case. In contrast, it probably made me more determined to complete it.

Do you have any future projects planned or in the works for the near future? If so, can you tell us about them at all?

I’m currently working on a new feature film, a claustrophobic thriller/drama that focuses only on one character, a female one. I’m at the final stages of script writing and I’m collaborating with independent producer Ioanna Karavela who is helping me to bring this project to life. In an ideal world we would like to shoot it sometime next year.  I can’t say too much about it at this stage but the subject matter of the film strives to question stereotypes, specifically challenge established perceptions around the notion of female identity and motherhood.  The acting and filmic style will be the strong components of this film that will contribute to the claustrophobic atmosphere and emphasize the importance of every passing minute.

I have also done some preliminary work on a prequel to Mnemophrenia that I would like to be my third film.

Film has been one of the hardest hit industries by the virus. Can you give us an inside opinion as someone with first-hand knowledge regarding how the virus has affected movie production now and into the future? How do you think it has changed the industry? What is the near-term outlook for movies? What about the long-term outlook?

We had plans to shoot the film I’m currently working on before the end of this year and we were hoping to get some funding and access to resources through the university that I’m a Senior Lecturer at. And then Covid-19 happen and everything came to a standstill. The funding stopped being available overnight and obviously any possibility for shooting disappeared.

The pandemic has completely changed the distribution/ exhibition process since as we can see now many independent cinemas are struggling to stay open and several cinema chains (at least in the UK) have decided to close down until further notice. Streaming platforms such as Netflix and Amazon are some of the big players now and more new platforms owned by big studios will appear soon and this will definitely affect the kind of films that will be made in the future. The optimists say that because of the increasing demand for content there will be even more opportunities for independent films. On the other hand, when film productions aren’t completely up to speed yet and international travel is restricted while there are extra production costs to ensure the health and safety of cast and crew I’m not sure whether smaller productions will have any advantage in this new landscape. I think it’s quite early to have a clear idea of what’s going to happen but one thing is for sure; our film viewing experience is bound to change.

Your fellow compatriot Yorgos Lanthimos has made quite a name for himself with a string of recent, shocking movies. Would you like to comment on his work? And can you describe briefly the state of Greek cinema, literature, or art in general?

I really like the work of Lanthimos and he definitely has succeeded in creating unique work with a very distinctive approach to acting and style. I like some of his films more than others but he has definitely achieved not to leave his audiences neutral to his work. He appears to be a bit like Marmite, you either love him or hate him. The last few years he has influenced other Greek filmmakers to create similar kind of films and that’s always a testament of the quality and impact of one’s own work.

I haven’t lived in Greece for almost 20 years now and I’m not so much in touch with the realities that Greek filmmakers and artists face. However, I have been aware that the state funding for films has been very limited and patchy and several films have been waiting for a very long time to get the green light. Therefore many of the Greek films that have managed to go to international film festivals and get recognition abroad are actually co-productions with other, mostly European countries.

There will be a free online screening of Mnemophrenia on the 17th of November at 7pm (UK time) followed by a Q&A with myself and Robin King (actor/ co-writer) where the viewers will have the chance to ask us questions directly. The link for booking a ticket is: here.