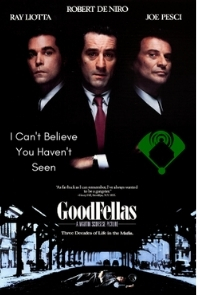 We have seen thousands of movies in our lifetimes, but sadly there are many classic films, considered among the greatest of all time, that at least one of us has passed over for years. In an attempt to rectify this situation, we now bring to you a new series: “I Can’t Believe You Haven’t Seen”, where we explore classic and popular movies that have previously escaped our attention.  Here in this first edition, Rob reviews the 1990 film Goodfellas.

This movie had a lot of build-up for me. Since its release, Goodfellas has been hailed, along with The Godfather, as a quintessential gangster film. It was nominated for six Academy Awards, and many people whose opinions I respect claim it among their favorite films. And while Goodfellas is far from the only film I have neglected among Scorsese’s oeuvre (Taxi Driver, Raging Bull, and Gangs of New York are all likely to be future entries in this series), The Departed is included among my own favorite films. Viewed for the first time, 30 years after its original release, Goodfellas does not disappoint.

Based on co-writer Nicholas Pileggi’s book Wise Guys, Goodfellas traces the rise and fall of real-life gangster Henry Hill. Dark and violent, the film is exceptionally well acted, particularly the performances from Robert De Niro, Joe Pesci, and Lorraine Bracco. Pesci, who won a Best Supporting Actor Oscar for the role, is the standout in nearly every scene he is in. Unfortunately, it was the narrator and main character, Henry Hill, played by Ray Liotta, that was the acting weak spot. It’s not that Liotta was bad, he was just constantly overshadowed by De Niro and Pesci, and I found his increasingly manic portrayal growing tiresome towards the movie’s end. Bracco, playing Liotta’s on screen wife Karen Hill, brings energy to what is otherwise a male dominated film and similarly outshines Liotta.

The tremendous acting performances certainly owe a lot to Scorsese’s direction. It is said that the director let the actors improvise during rehearsals, shooting four or more takes and rewriting scenes around the best of the improvisations. Stylistic decisions firmly absorb the viewer into the period and serve to enhance the violent tone of the film. The cinematography is equally impressive. A long tracking scene through the back hallways of a nightclub was one that I was still thinking about much further on in the movie.

Overall, Goodfellas was entertaining throughout and felt shorter than its two-and-a-half hour runtime. The acting is superb, but the characters themselves are mostly unrelatable. They are all a bunch of scumbags, but they are a great at being scummy and make it easy to see while people are attracted to the gangster lifestyle. While I still prefer The Departed, Goodfellas does have more style.

Up next in our series, we look at David Cronenberg’s adaptation of Stephen King’s classic in The Dead Zone.