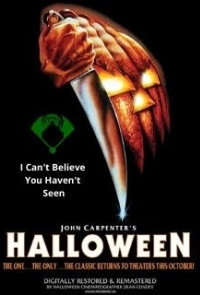 Our first two entries into this new series examining movies that we had never watched until recently were Goodfellas and The Dead Zone. The Dead Zone  is a very famous science-fiction adaptation with television spin-offs, so we felt it an appropriate inclusion; Goodfellas, while being one of our least favorite genres in general, is one of the most awarded and heralded films of the previous 40 years and obviously belongs in the series. Our third review, however, is even more surprising to have gone previously unwatched:

Sure I’ve seen a few of the Halloween movies. Who hasn’t? And I’d even seen parts of the original before now, but never more than a minute or two in passing. This was the first time I sat down and watched it from beginning to end. I enjoy horror movies, but it’s such a difficult genre and great horror is exceedingly rare. I think I’ve avoided Halloween all this time because I just never thought it would be that great, always expected a disappointment and so never gave it a chance.

Doubting Halloween was a mistake.

Quite simply, this is one of the best horror movies of all-time, belonging among such classics as Psycho, The Shining, and Alien, all of which we have seen and won’t be appearing later in this series.

The opening scene is one of the scariest, tensest, and most shocking horror shots in the history of film. And from then onward, the film doesn’t release its hold on you. The scares are subtle, creepy, and brilliant, while the acting and sets have aged very well. The production quality and editing surpass many films made decades later. I kept asking myself, “Was this really made in 1978?” It looks and feels like it could be from 1998. The lack of gore and cheap scares also make it stand out among its contemporaries and nearly every horror film since.

The plot is simple yet great; the story structure is also modeled brilliantly. Throughout one storyline you get the scares and building tension. On the other hand, the second plot gives you the chase and psychology. Both of these work well together, complementing each other and never interrupting. The acting is also very good, especially Curtis and Pleasence.

The sound and the music is possibly the best and most well-fitting sound track and editing in the history of horror, and has a place among the best of all-time regardless of genre. By now everyone knows the music, but many forget why it has become so eponymous with scary moments. It’s because this movie, where the music originated, is a pure masterpiece.

Recommended for fans of horror, fans of film, fans of Halloween, fans of crime and criminal psychology, and fans of amazing soundtracks. Go watch this film; if you already have like most of you probably have, go watch it again. I know I will rewatch it soon.